If Marius had more than an hour to talk about the Media Plugin, he most certainly would have taken it. To go over the features and functionality of the entire plugin would have been many hours as there is a lot there. A brief touch on the features provided by the plugin was discussed, with some examples.

Requirements are in the high end, but considering the state of PHP and the upcoming version of CakePHP, developers should be moving forward in terms of their PHP version and library support anyway. The Media plugin requires CakePHP 1.2.x.x and PHP 5.2.0+. It enables the transfer, manipulation and embedding of files in many varied ways.

You can find the media plugin at: http://github.com/davidpersson/media

Marius' focus was on doing media manipulation and embedding "properly", and identified that while there are lots of user contributions floating around the net, none of them were meeting his needs and were flexible enough. One of the main points he made here was that if done incorrectly, potential security risks arise due to command line interaction and file saving. Validation was one particular section of the code that made this a tricky plugin to develop, but allowed tests to be implemented to ensure security.

Some common points that we hear all the time came through, and they make sense for CakePHP as well as any web application for security reasons:

The media plugin contains about 8 new rules for file validation purposes to ensure that submitted data meets the application needs. Beyond validation, it handles all kinds of uploads, HTTP Post, Remote HTTP and local file inclusion.
A console is included to initialize the default directory structure, and as such, could be included as part of a deployment script with the CakePHP console.examples.

To ensure flexibility of use, a behavior is included to allow attachment to any number of models, and generioc storage and linking provided to ease integration into existing apps.

Marius concluded his talk with a plea for feedback. There are plenty of people using the plugin, but more feedback is required to ensure its the best it can be, and that all bugs  (if any) are squashed. Checkout the code at: http://github.com/davidpersson/media

Do these changes: The configuration keys from CsrfComponent cookieName, expiry, secure and field are also available in the middleware. If you used any of these, you should be able to continue using the middleware.

Is not recommended to disable CSRF, but sometimes you really need to. With the component you could have something like this in your controller:

Now with the middleware, we can use the method skipCheckCallback to disable Csrf based on a custom logic: 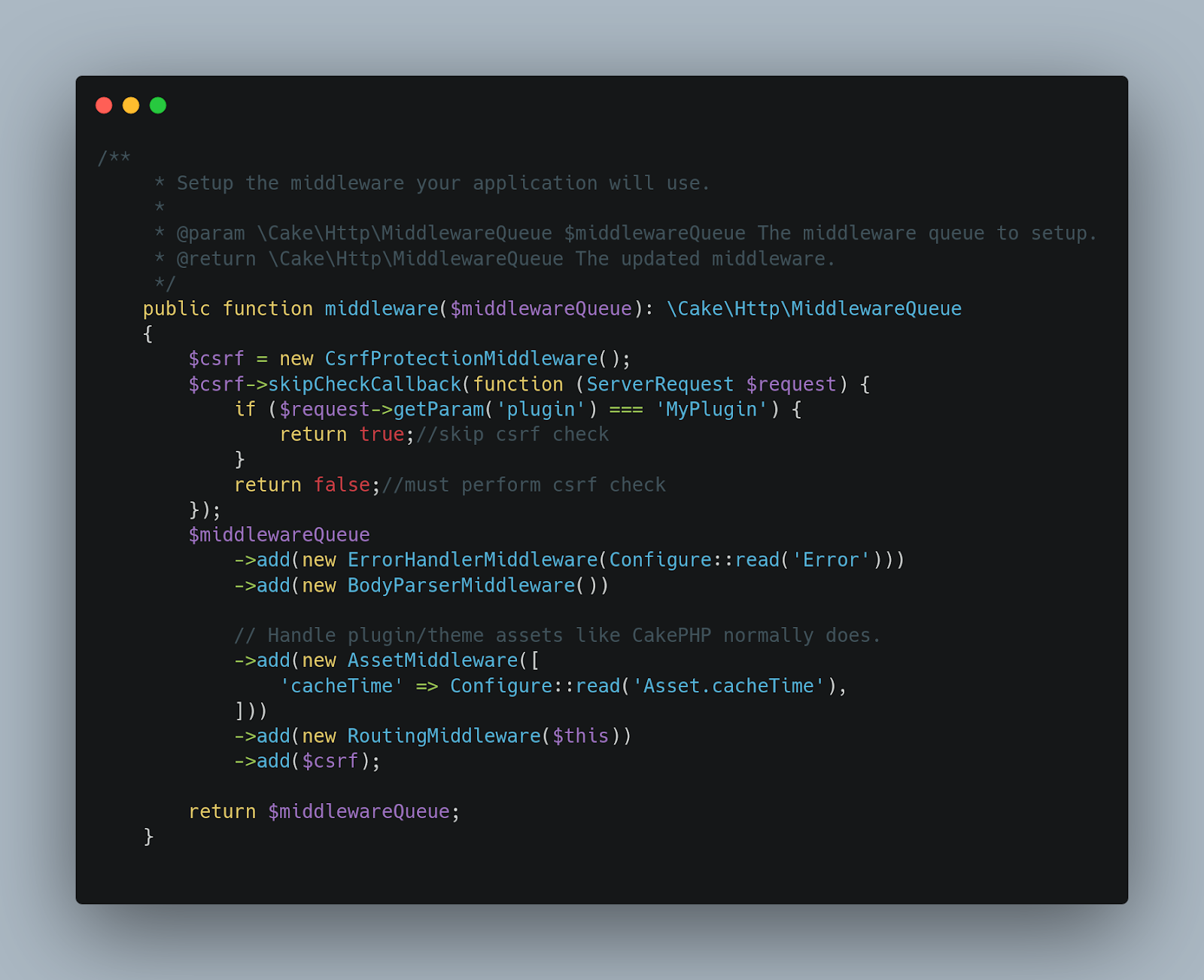 That’s it, we have migrated CSRF protection from CsrfComponent to CsrfProtectionMiddleware.

CakePHP Upgrade to 4 - Piece by Piece

Using this approach, you can break your application into 2 parts, and start moving features by path to CakePHP 4. You'll need to handle the changes in 2 projects for a while, and pay this overhead,  but this could be better to maintain than a CakePHP 2.x application sitting on an old PHP version. Happy baking!

Dependency Injection is some of the bigger buzzwords in PHP frameworks.  Historically, CakePHP application logic didn’t support that, until the version 4.2 was released last December. You can do that on your own and have a few plugins for that. This is a new chapter of the framework, let's see how to bake it.

First, let’s talk about a classic Use case on real applications. Our application will include an address form, such as the shipping address for an online order, or provide information about User, Company, etc. Autocomplete can help users supply the details.   We will use the Geocoding API from Google Maps Platform, making a HTTP request for API with json output format and address parameter: https://maps.googleapis.com/maps/api/geocode/json?address=89104&key=****** And here we go, we will get this result:

After seeing the Use case, all we need on our backend is to make a HTTP request for API and return the JSON result for the frontend to populate related fields.   1. First, let’s exposing our application for accept “.json” requests:   2. Now, we can bake a Address Controller and let’s request an empty result: $ ./bin/cake bake controller Address --actions index   Now our app requests /address.json will return an empty JSON.   3. Let’s bake (manually) the Address Service:   Basically I’m using Cake\Http\Client to make the API request. Also I read Geocode.key from Cake\Core\Configure, we don't want to expose our key on public requests (add the key on config/boostrap.php).   4. Let’s rewrite our Controller:   5. Finally, let’s add our Service on Application.php:   That’s all bakers! Now our endpoint /address.json will support query parameters and return the result of the API request.

The cost of shiny

I’m here selling an idea and I don't start with the cons. Unfortunately, the Dependency Injection container is an experimental feature that is not API stable yet.  The support is a bit limited, CakePHP will inject services into: constructors of Controllers and Commands and Controller actions. The core team hopefully stabilizes the feature on version 4.3, or at most 4.4. They need your help testing and finding cases, and feedback always is welcome.   I hope this post can be useful for you and your projects.  See you next time!