CakePHP - An Open Source Framework With Many Benefits

Since its debut in 2005, CakePHP’s main thrust has been to make software development easy, fast, and painless. In a span of just 11 years, CakePHP proved its worth by withstanding the test of time and earning its place as the premier framework for software development. Its success in this grand effort can be gauged by how enthusiastically it has been embraced by the software community: a whopping 8 million visitors; 29,908 commits; and 30 million page views!

What are the secrets behind its enduring popularity? What features and benefits account for its continued appeal? Why would anyone want to use CakePHP? These are some of the questions we will answer below.

One main reason you want to use CakePHP is for its solid security attributes. With incidents of cyber security breaches and random computer-generated-attacks at an all-time high, who isn’t worried about website security these days? Gone are the days when security used to be optional. Today, security is a mandatory feature that all websites must ensure if they are to thrive and survive.

Framework support for security varies from one framework to another but CakePHP is by far the finest in security among frameworks for PHP because of its unmatched set of security tools and safeguards it incorporates. These include among other things input validation, data sanitization, SQL injection, CSRF (cross site request forgery - prevents unauthorized commands from being transferred), and XSS (cross site scripting - prevents malicious content from being delivered). It also features hashing and advanced encryption algorithms such as SHA1, SHA256, MD5, Blowfish, and Rijndael/AES-256).

If security was its only strength, CakePHP would still remain a top contender. But CakePHP also excels in the ease and simplicity with which software applications can be developed. Featuring a lean MVC architecture that neatly organizes code according to function; conventions that facilitate standardization; and scaffolding and code generation tools that streamline development, CakePHP has everything you need to develop a highly functioning and trouble-free website in a very short time. Moreover, its support for all the popular and major databases such as MySQL, SQLite, PostgreSQL, and Microsoft SQL Server as well as for caching engines such as Memcached or Redis will be greeted with pleasure by all developers.

CakePHP also makes maintaining migration path very easy for developers because tools do most of the work. Moreover, new features and updates are enumerated clearly making it easy for developers to keep abreast of the latest versions of the framework among other things.

CakePHP's documentation is truly phenomenal! It not only provides a detailed explanation of the entire framework along with a complete API reference but also features hundreds of instructional manuals and video tutorials. Moreover, all are accessible online. Certification paths and training venues are also available for those who want to delve even deeper towards mastery.

Best of all, CakePHP's code is open source, totally free, and available under MIT license that allows commercial use!

The above list of features makes it clear that CakePHP’s popularity is earned and well deserved. No framework has ever been able to simultaneously provide so many benefits in such a short time. Please contact us if you have any questions or want to know how CakePHP can help you with your project.

One CakePHP Project Per Day

The whole team here at CakeDC are big supporters and contributors of the CakePHP community. For this month, I decided to do “one CakePHP project per day” to share with the community.  Here are some of my projects so far:

A one page note application using CakePHP 4 and Bootstrap 5. This project is  a good starting point to learn the framework. Link: https://github.com/rochamarcelo/one-project-a-day-challenge-01-notes

An application to manage contacts - you are able to list, add, edit and delete contacts, upload contact avatar images or use avatar images from gravatar.com . It was built using CakePHP 4, plugin friendsofcake/search, plugin josegonzalez/cakephp-upload, Gravatar, and Bootstrap 5.  Link: https://github.com/rochamarcelo/one-project-a-day-challenge-02-contact-list

An application to manage recipes, using CakePHP 4,  CouchDB and Bootstrap 5. This one is a good starting point to learn to use CouchDB with CakePHP, including how to list, add and edit recipes (documents). Link: https://github.com/rochamarcelo/one-cakephp-project-a-day-challenge-03-recipe-box

An application to list services and apply exchange rate using the api https://exchangeratesapi.io/documentation/ and CakePHP 4. In this one you see the custom namespace WebService to handle logic related to api as client. Link: https://github.com/rochamarcelo/one-cakephp-project-a-day-challenge-04-service-plans-ex-rate

An application to see which movies are in the theaters and which hours by screen each day of the week. A good example of complex queries, model associations and seed data. Link: https://github.com/rochamarcelo/one-cakephp-project-a-day-challenge-06-movie-theater-schedule

An application to help easily find podcasts and download episodes. In the source code you’ll find how to use the itunes api,  a structure to handle Model actions (that I think is a good option to make your models cleaner), and a way to parse podcasts feed (XML); example usage of dependency injection. The application was built with CakePHP 4 and Bulma CSS Framework. Link: https://github.com/rochamarcelo/one-cakephp-project-a-day-challenge-07-podcast-finder

An application to create short urls - a good example of how to create custom routes and use custom primary key types for a model. The application was built with CakePHP 4. Link: https://github.com/rochamarcelo/one-cakephp-project-a-day-challenge-08-url-shortener

Users can list quizzes, create quizzes and answer at any time. A good example of how to use MongoDB with CakePHP 4 with a base structure for Collection classes.  Link: https://github.com/rochamarcelo/one-cakephp-project-a-day-challenge-09-quiz

An application to easily send files to anyone, create an account, upload the file and inform the person email to send to. Built with CakePHP 4, plugin CakeDC/Users,  plugin Josegonzalez/Upload,  plugin friendsofcake/bootstrap-ui, SMTP and Bootstrap. A good example to see the usage of these plugins. Link: https://github.com/rochamarcelo/one-cakephp-project-a-day-challenge-10-file-transfer

A one page application for  users to manage their tasks. The user can create and remove decks, create and complete tasks, and list tasks grouped by decks. Built with CakePHP 4, plugin CakeDC/Users and Bootstrap 5 Link: https://github.com/rochamarcelo/one-cakephp-project-a-day-challenge-11-tasks

Perfect time for this project, right?! An application to display olympic medal count by country and sports. The source code uses CouterCache behavior and aggregated query. Built with CakePHP 4 and Bootstrap 5. Link: https://github.com/rochamarcelo/one-cakephp-project-a-day-challenge-13-olympic-medal-count

An awesome dashboard to manage smart devices using MQTT Messaging, CakePHP 4, CakeDC/Users plugin, php-mqtt/client (testing with Mosquitto Broker) and Bootstrap 5. The application is able to publish messages to change device status and subscribe for status changes. Link: https://github.com/rochamarcelo/one-cakephp-project-a-day-challenge-14-smart-home-dashboard-mqtt    I hope that this initiative will somehow inspire others to put their Cake skills to work, and share their projects with the community. If you’d like to see my future projects and posts, you can follow me on Twitter, and I will share them all there! https://twitter.com/mrcodex

The log of applications is gold. It's an important part of the software, they represent the health of the application. By default, CakePHP will use the FileLog adapter which will write to /logs/ folder. It's hard to track the live issues, and by hard I mean you will need to connect to the server, open the file on /logs/ and look at the issue which you want to investigate.   What do you think if your application sends the error directly to your team communication (Slack, Teams, RocketChat) application? Will be easier to know about a new error after some deployment? This error is sneaky, and can be in command applications. Often, we only look at the errors when the users report it.   For this sample I will use Slack, but this approach can be implemented for any application.  All we need is to create a Log adapter and configure it. So…let’s bake that:     Now we may get errors like this: 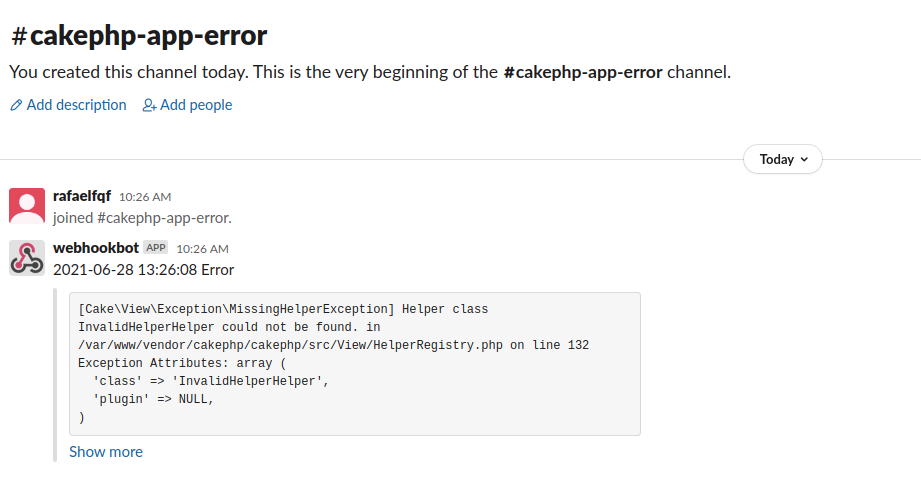 That’s all bakers! I hope this article can be useful and you can improve your logs.