Felix started off by baking his application. While baking his controller he added in the Javascript Helper and RequestHandler Component. This will save adding them in later. Because the demo was based on Jquery the Ajax helper could not be used. However, Felix raised a very good issue of using a helper vs. writing Javascript. His opinion is that if you want to build a heavy AJAX application you should write all your javascript. If you just need a bit of AJAX sprinkled on you can use the helper. However, helpers are difficult to use in wide applications as they abstract one language into another which is tricky.

Felix talked briefly about how he organizes his javascript. He likes to have specific javascript files for each controller/view placed in js/views as well as a few utility libraries. This allows his projects to reuse general js code as well as keep the Javascript separate for each view.

Felix recommends using the form jquery plugin for working with forms. It allows you to easily add ajax behavior to your forms. After adding jquery.forms to the layout and creating his view js file. He was able to quickly make his form Ajax-ified. A question was asked about using JSON with Ajax in CakePHP. Felix then demonstrated how you could create a JSON Ajax view. By adding Router::parseExtensions('json'); Felix then created his json layout and his json view. Extension based views need to go into a directory that shares the name with the extension. By adding a 2nd and 4th parameter to $.get() you can force a json return.

Is an example of how to do this. A question about pagination was asked. Felix's solution was to use a selector and attach an event to all your pagination buttons.

This concludes CakeFest Argentina. I had a really great time and would like to thank everyone who came out, and everyone who presented. I would also like to thank all of our sponsors, SaniSoft, Zeadoo, WidgetPress and the CakeDC. Lastly, thanks to Mariano and Claudio for orgnanizing and hosting the event.

As you know, CakePHP announced the version 4.x last December.I recommend that you consider upgrading your applications to the next version, to keep up to date and get all the benefits. Now, let's see how to bake!

First things first, if you are not running on PHP 7.2 or higher, you will need to upgrade PHP before updating CakePHP. CakePHP 4.0 requires a minimum of PHP 7.2.

There is an upgrade CLI tool for rename and moving the templates and resources:   Templates and Resources must have been moved and renamed, check the result below: 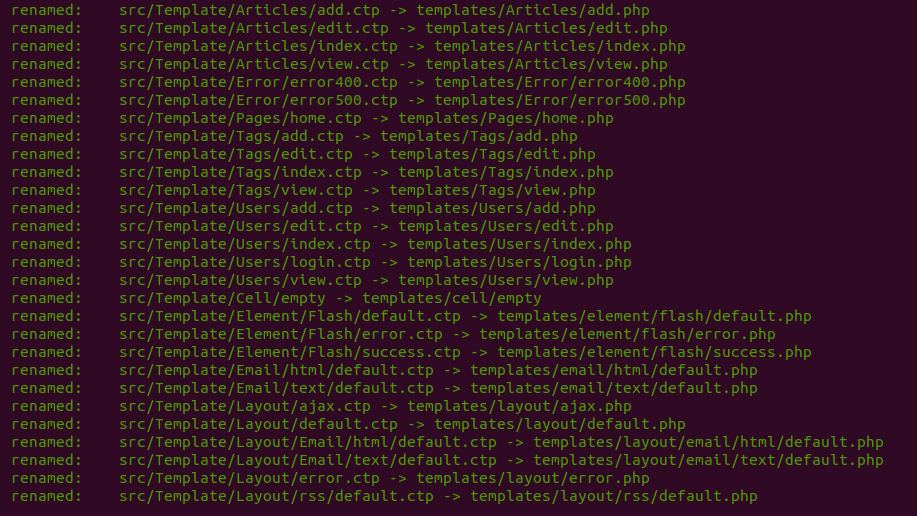 * This project doesn't have Resources files   Now, let's create a new constant for Resources on /config/paths.php: Finally, update the paths on config/app.php:

The next step is optional (and the Migration Guide included this) - run the rector command to automatically fix many deprecated method calls: The rector applied on codebase some return type declarations: 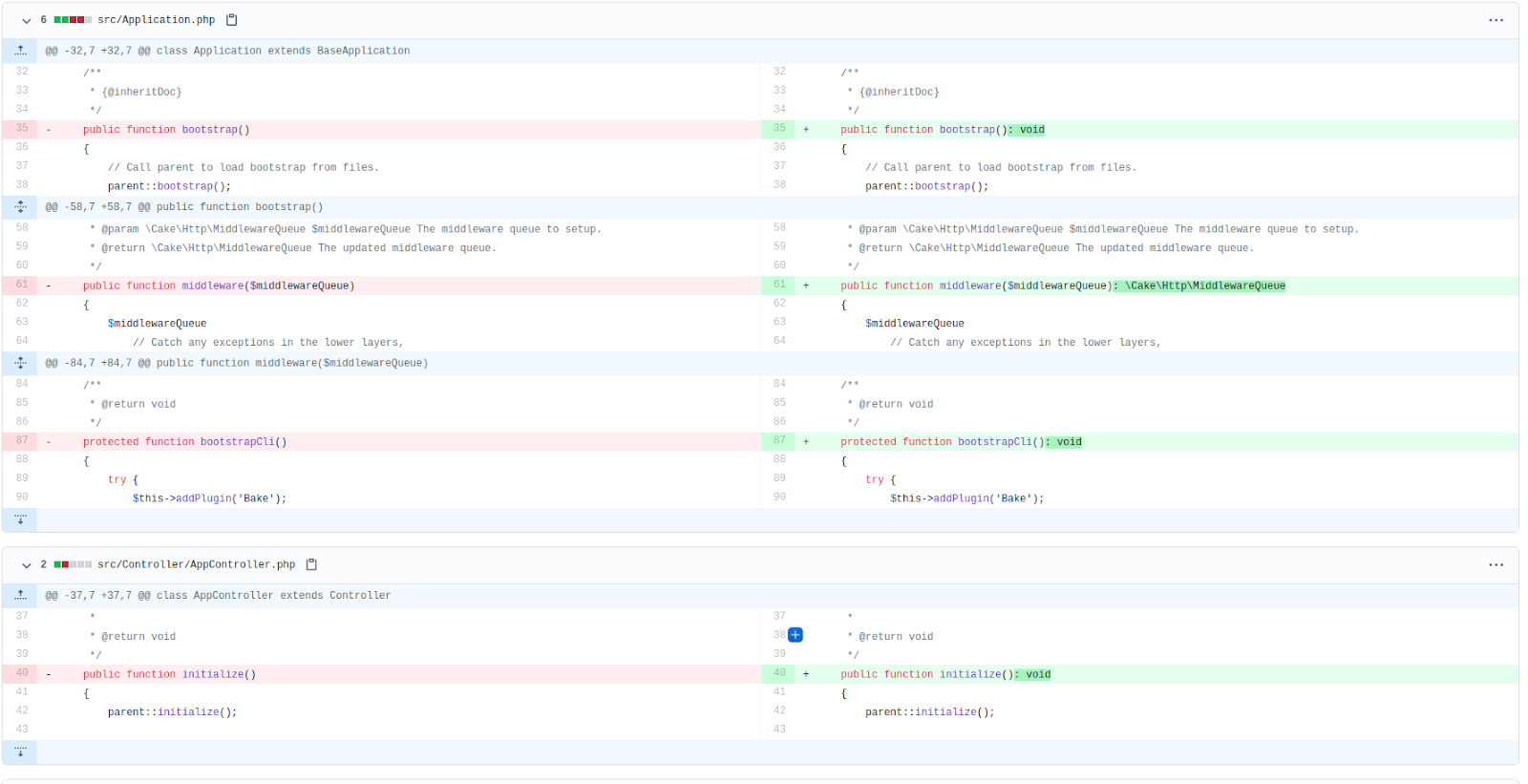 https://github.com/rafaelqueiroz/cakephp-upgrade-sample/commit/d7e5c2ecc5dc28045700a270721f07098a8e189c?branch=d7e5c2ecc5dc28045700a270721f07098a8e189c&diff=split Pay attention: It is important to apply rector before you upgrade your dependencies.   Upgrade CakePHP and PHPUnit: PHPUnit can be upgraded easily. Most of the time, the --update-with-dependencies doesn’t work with me for CakePHP:

The root of the issue is the packages using Caret Version Range, so let’s update debug_kit, migrations and bake using editor:   Here we go:

Here, we have few deprecations and warnings. Do you remember I mentioned the rector is optional? So, the question is the rector and it's not always able to handle these issues.   I will use the PHPStan to fix this - we will install with composer: Now, we can run the phpstan analyse and fix the issues:

It's up to you how much effort you will put in with PHPStan issues. I recommend fixing everything. For this post, I did fix only what was needed to run the project after the update, you can check the fixes on this commit.   After the last fixes, the project is running well: 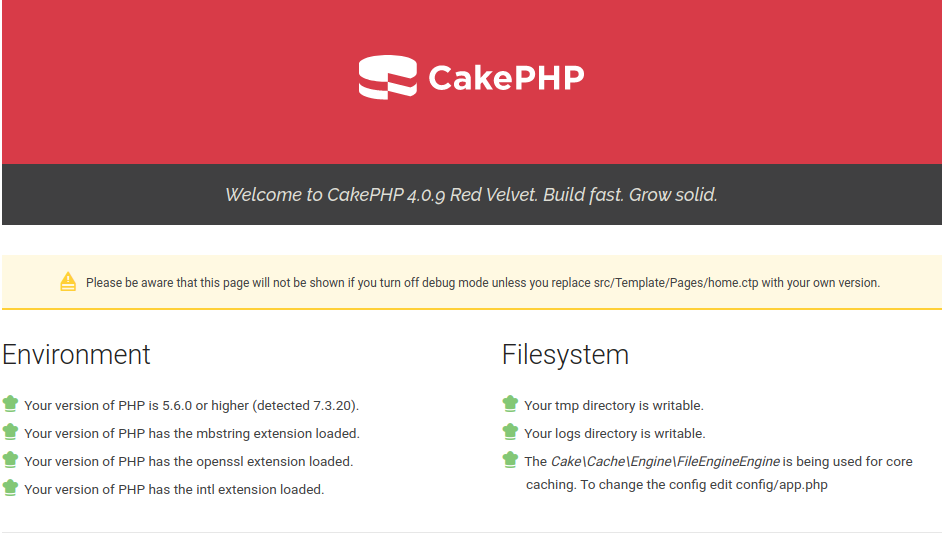 That’s all? No. But we upgraded CakePHP? Yes. Real applications probably use many plugins, and if these plugins don't have a version for CakePHP 4, you will need to update. Depending on the size and level of complexity of the project, the upgrade could be hard, but never impossible.    If you do not feel confident or your company would like to outsource support for this, don't hesitate to contact us at Cake Development Corporation. Our team is offering a full upgrade from CakePHP 2/3 to CakePHP 4. This will be a migration of your current application code to make it compatible with CakePHP 4 features, plugins, security settings, etc. We will be doing these migration services for a special rate - something we have never done before! Learn more about our Upgrade Services You can check the codebase of the examples on this repository. The branch upgrade has all steps by commit.  With every release CakePHP gets better, and version 4.x is no exception. There are many benefits that come with upgrading, and it makes baking a lot easier.

SQL language for different databases has some differences, which could cause problems after migrations between these databases. Here, we collected some hints, problems could appear during migration from MySQL to PostgreSQL. We focus on the CakePHP model layer and query generation layer.

Tables join in where expression

Often we want to join two tables using a condition like $query->where([‘Author.id = Article.author_id’]) which works fine till we dont need field alias quotes. In the case of migration to postgres, we might want to enable autoQuotes. In this case, we can use $query->newExpr()->equalFields(‘Author.id, Article.author_id’).

By default mysql does case insensitive search. Switching to postgres, you can note that some functionality works differently. Hopefully you have tests, which covers your code, and this will be detected during migration. Postgres uses custom syntax for such queries named ILIKE.The case of old style conditions where method arrays straight forward,  you’d just go with ILIKE instead of LIKE. But what if we want to use ILIKE in builder methods... Here is that example:     return $query->where(         function (QueryExpression $exp) use ($field, $value): QueryExpression {             return $exp->add(new \Cake\Database\Expression\Comparison($field, $value, 'string', 'ILIKE'));         });

As postgres is much more strict with types, type casing is not a rare operation and may be needed. Here is an example of how to perform it using FunctionExpression: $expr = (new FunctionExpression('CAST'))->setConjunction(' AS ')->add([$id, 'varchar' => 'literal']); which generates expression like :id AS varchar there :id is the placeholder for variable $id. This trick, used with literal, allows you to cast to any postgres type.

Quotes of tables and fields

Sometimes it is critical to inform CakePHP that the field should be quoted. One recommendation is to avoid using plain strings in case of table joins, or using IS NULL as string. So if array syntax is used, all CakePHP conventions must be followed. However,  sometimes we should help the ORM and obviously wrap a field name with IdentifiedExpression. Let's take a look back to the previous example, but now we want to type cast not value, but a field. The only solution to quote field name correctly is using this code:     $id = new IdentifierExpression($this->aliasField($field));     $expr = (new FunctionExpression('CAST'))->setConjunction(' AS ')->add([$id, 'varchar' => 'literal']);

In case we want to generate expressions in query fields, and we don’t want to overcomplicate logic, we could use these next tricks. Here, I have created ListExpression, which could be used as a collection of expressions. Each of these are corrected, and generates a query with correct handling of each element. See: https://gist.github.com/skie/f6e4f1a1b61e0f902a507f7907c3bbf2 So, say we want to generate expressions like this: “Events”.”time_to” - “Events”.”time_from”... With ListExpression, it can be done quite easy:  $diff = new ListExpression([new IdentifierExpression('Events.time_to'), '-', new IdentifierExpression('Events.time_from')]);   Hopefully these tricks will be as useful for your baking as they have been for mine!